The Federal Writers’ Project of the Works Progress Administration (WPA) was part of the Roosevelt administration’s evolving New Deal program. Created and directed by a remarkable group of scholars and intellectually interested administrators, the Writers’ Project was primarily a work relief project. It was designed to provide work relief to white collar workers, unemployed teachers, librarians, clerical workers and others who could not have been usefully employed digging ditches and moving rocks, like those in the often better remembered Civilian Conservation Corps, also administered by the WPA.

The Federal Writers’ Project (FWP) sought writers in every state, and over time contributed to the survival and literary success of many important writers. Nevertheless, writers always remained a small minority of Project employees, and deliberately so. As Jerre Mangione, a young FWP administrator and many years afterward the Project’s first historian noted, the WPA administrators who designed the Federal Writers’ Program arranged it in this way to insure its political survival. They knew Congress could not fund a relief program just for writers and intellectuals, so they planned a program that would employ the widest possible range of white collar and clerical workers, as well as established or aspiring writers. 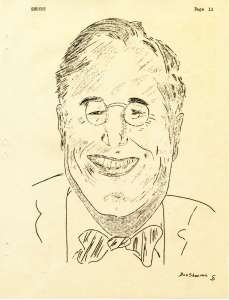 WPA administrators had inherited from the Federal Emergency Relief Administration (FERA) a program to use unemployed teachers and the like to survey and inventory local historical records, and they also inherited from FERA a just published guidebook to the state of Connecticut, a project that had employed the kind of diverse workforce that the FWP was looking for.

On these foundations the WPA leadership designed a prospectus for the American Guide Series, the completion of which would be the central and organizing mission of the Federal Writers’ Project. In its ultimate form the plan came to this: To set up a Writers’ Project in each state, there to employ writers, editors, researchers, map-makers, clerks and other white collar workers to research and write detailed guides to the peoples, geography, history, resources, traditions and achievements of that state.

As historian Jerrold Hirsch says, the Federal Writers’ Project’s planners were “New Deal progressives.” They believed that by accurately documenting local and regional history in the American Guide Series, they could help reshape American national identity around more inclusive, egalitarian and democratic ideals. The Guides would recognize and document contrasts in the historical experience of ordinary Americans across boundaries of class, race, and ethnicity. In so doing the Guides, planners hoped, would create a portrait of the United States more truthful and more interesting than any that existed, a portrait reflecting the complex pluralism of its regional and ethnic folk cultures.

In time, the Federal Writers’ Project achieved remarkable success. Its most recognized and celebrated product would be the American Guide Series, a series of substantial guides to each of the 48 states contiguous states and Alaska which combined essays about the natural settings, history, economic conditions, government, folk cultures and the arts in each state with automobile tours of that state’s unique natural, historical, and cultural landscapes. Author John Steinbeck, who managed to acquire the whole series, wrote (1962) that “the complete set comprises the most comprehensive account of the United States ever got together, and nothing since has even approached it.” Even now (2007) experts still consider the American Guide Series to be the most broadly conceived survey of the cultural geography of the United States ever undertaken.

Work on the Guide Series served as an umbrella for a broader program of publication and research at the state level. As preparation for the big task of producing a state guide, or as a supplement to it, state Writers’ Project offices produced numerous guides to cities, towns, and smaller communities. The Washington leaders of the FWP also initiated a very timely and innovative program to collect folklore and oral history. Local researchers interviewed former slaves and elderly Native Americans, they collected the reminiscences of old pioneers and later immigrants of every nationality. In creating these collections, the Washington FWP and its state level employees made a remarkable departure from popular opinion and intellectual orthodoxy which at that time regarded true American folk culture as almost exclusively English in origin.

When the Guides began to reach publication, contemporary critics, at first amazed by the scale of the effort, were at last even more impressed by the sheer quality of the individual books. Mangione cites the Saturday Review of Literature critic who said of the attention to detail, “it makes my editorial head reel.” Louis Mumford, perhaps the most influential public intellectual of those years, wrote that the guides were “the finest contribution to American patriotism”of his generation. Others appreciated the vivid cultural world revealed by the Guides, the ingenuity, strange quirks and bizarre sense of humor that sustained Americans in the most difficult circumstances.