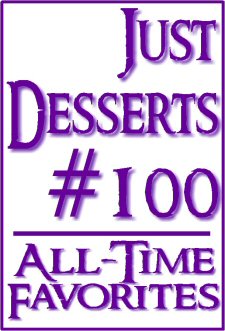 The March 31st, 2016 meeting of the Just Desserts mystery fiction discussion group was the 100th meeting of the group. To celebrate this milestone, we held a super-sized meeting, at the Walt Branch Library instead of the South Branch Library. Lincoln Journal Star reporter/columnist Cindy Lange-Kubick also did an article about the group two days before the meeting, featuring interview quotes from several group members – this article led to a total of 47 mystery fans joining us for this particular gathering.

Rather than all reading the same book for discussion, the theme of meeting #100 was “All Time Favorites” – participants/attendees were encouraged to share a few comments about what their all-time favorite mystery novel or short story collection was, and why. Of the 47 attendees, 45 spoke out, either about a specific favorite title, or simply identifying some of their favorite mystery authors. The meeting was recording on audio for release as a podcast (eventually), but in the meantime, here is the list of titles/authors that were mentioned as favorites during this meeting.

We hope you’ll join us again, back at South Branch Library, on Thursday, April 28th at 6:30 p.m., for a discussion of Jo Nesbo’s The Redeemer.

What mysteries have you been reading lately?