“Our city libraries continue to be hubs of activity where patrons have access to a great collection with the latest in popular titles and new discoveries,” said Ryan Wieber, Director of Lincoln City Libraries. 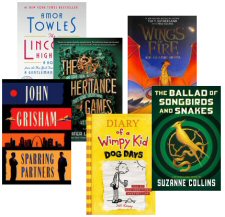 The most popular titles in all formats are as follows:

“We find that people love end-of-year lists, and the libraries’ top 10 most read lists is a great way to share what the Lincoln community has been reading this last year,” said Rebecca Aracena, Support Services Coordinator.