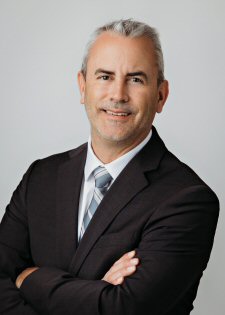 Mayor Leirion Gaylor Baird today announced that she has chosen Ryan Wieber, the current Director of Kalamazoo Public Libraries, as the new Director of Lincoln City Libraries. He will replace Pat Leach, who retired at the end of August after 40 years of service to the City of Lincoln, including 14 as the last permanent Director of the Library Department. Wieber will begin his new job on December 8.

“Ryan emerged as the unanimous top candidate during our search for the next Director. His enthusiasm for learning, experience as a library leader for over two decades and strong desire to lead Lincoln City Libraries into the future were notable strengths,” Mayor Gaylor Baird said. “As we look to strengthen and expand the library system in Lincoln, I know Ryan has the skills and capabilities to create the consensus needed to achieve our dreams for public libraries in the Capital City.”

Wieber has served as the Director of the Kalamazoo Public Libraries in Kalamazoo, Michigan, since 2017, leading a public library system with an annual operating budget of $13.5 million, 180 staff and five locations. Prior to that he served as the Director of the Van Buren District Library in Decatur, Michigan from 2013 to 2017 and the Otsego District Library in Otsego, Michigan from 1999 until 2012. He is the current President of the Michigan Library Association. Wieber holds a Bachelor of Arts in Public History from Western Michigan University and a Master of Library Information Science from Wayne State University.

“I am excited to arrive in Lincoln and begin leading a superb library system with strong ties to its communities,” Wieber said. “It is especially evident the City recognizes the value of its libraries, and I am thrilled to begin meeting our staff, stakeholders, and residents, and continuing excellence in public library service.”

Dan Sloan, President of the Lincoln City Library Board of Trustees said, “Ryan has the skills, experience and drive needed to grow, strengthen and innovate our already very strong library system. He is a dynamic leader with a proven record of strong management, collaboration, and innovation. We are thrilled to have someone of his caliber lead the library into what promises to be a very exciting future.”

Mayor Gaylor Baird expressed her sincere appreciation to Jocelyn Golden for serving as the interim director of Lincoln City Libraries during the search process. Golden will return to her duties as an Assistant City Attorney when Wieber assumes his role.

Lincoln City Libraries (LCL) supports lifelong education for the Lincoln community through its support for learning, literature, and literacy. Within LCL’s eight locations, residents can check out books, DVDs, and CDs, attend special events such as preschool learning times or book groups, use library gathering spaces for study or meetings, and connect to the Internet via the library’s personal computers or the library’s wireless internet.