One Book – One Lincoln:
Friendship, Betrayal and Redemption

‘Hosseini’s stunning debut novel starts as an eloquent Afghan version of the American immigrant experience in the late 20th century, but betrayal and redemption come to the forefront when the narrator, a writer, returns to his ravaged homeland to rescue the son of his childhood friend after the boy’s parents are shot during the Taliban takeover in the mid ’90s…Add an incisive, perceptive examination of recent Afghan history and its ramifications in both America and the Middle East, and the result is a complete work of literature that succeeds in exploring the culture of a previously obscure nation that has become a pivot point in the global politics of the new millennium.’
— Publisher’s Weekly (starred review) 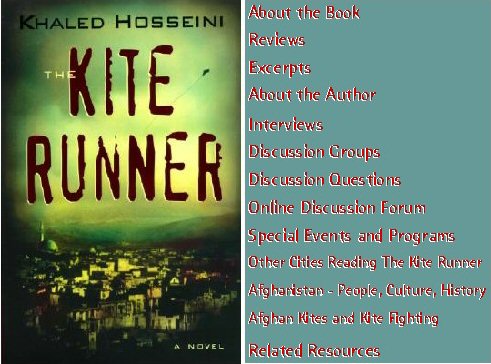 The Kite Runner by Khaled Hosseini has been selected for the 2005 “One Book – One Lincoln” program.

The idea of city-wide reading programs started in Seattle in 1998 with the program “If All Seattle Read the Same Book” initiated by the Washington Center for the Book located at the Seattle Public Library. The Library of Congress’ Center for the Book reports that “One Book” programs are being introduced across the U.S.A. and around the world.

This is Lincoln’s fourth year of the program. In the fall of 2002, thousands of Lincolnites read and discussed Plainsong by Kent Haruf. For 2003, Ann Patchett’s award-winning novel Bel Canto was selected for our second city-wide reading experience. And in 2004, Leif Enger’s dazzling debut novel Peace Like a River was the choice for Lincoln’s third annual community reading program. Now, for 2005, we invite Lincolnites to go on a journey of friendship, discovery and redemption, exploring the culture and history of Afghanistan and its people, as we read and discuss Khaled Hosseini’s novel The Kite Runner.

How can I participate?

Setting up a discussion group

We can provide a discussion leader for your group

What programs will there be? Will the author visit?

Several special programs are being scheduled at various branches of the public libraries during September, October and November with ties to the themes and events of The Kite Runner. More information will be available when the Resource Guide is made available to the public in September.

At present, Khaled Hosseini is not scheduled to visit Lincoln. This Web site will be updated to reflect any new information as it becomes available.

How was The Kite Runner chosen?

A call for nominations from the community in January resulted in 145 different titles being nominated. The general criteria for the title included:

A selection committee with community-wide representation was formed to select the book for this year’s community reading program. Members included:

The title they selected is The Kite Runner by Khaled Hosseini. The Kite Runner is a novel about friendship, betrayal, and the price of loyalty. It is about the bonds between fathers and sons, and the power of fathers over sons – their love, their sacrifices, and their lies. Written against a backdrop of history that has not been told in fiction before, The Kite Runner describes the rich culture and beauty of a land in the process of being destroyed. But with the devastation, Khaled Hosseini also gives us hope: through the novel’s faith in the power of reading and storytelling, and in the possibilities he shows for redemption.

What other books were considered for 2005?

The other four finalists for One Book – One Lincoln – 2005 were:

You can also Click Here for more detailed information about the five finalists!

The Lincoln Journal Star and the Lincoln City Libraries thank the following additional supporter of One Book – One Lincoln: