Earlier this year, we accepted your nominations for our fourteenth annual One Book – One Lincoln title, via drop boxes at all the libraries and on the libraries’ web site. All of your suggestions were forwarded to a special One Book – One Lincoln committee, comprised of representatives throughout the community, which evaluated the 179 nominated titles to choose the group of three finalists below — two novels, one non-fiction title. This year, that committee also selected the winning title. This group of finalists – and the winner among them – was announced at a live event, sponsored by the Foundation for Lincoln City Libraries, at The Mill in the Haymarket on May 25th, as well as on the library web site.

This year, One Book – One Lincoln is on a different timetable that in past years. Following the May announcement of the winning title, we are finalizing our thematic programming, which will be in July and August, so as not to conflict with Summer Reading Program events. We encourage you to read Americanah and watch the Lincoln Journal Star, Facebook and this web site for further developments on One Book – One Lincoln – 2015.

And the top three finalists for 2015 are…

From the award-winning author of Half of a Yellow Sun, a dazzling new novel: a story of love and race centered around a young man and woman from Nigeria who face difficult choices and challenges in the countries they come to call home.

As teenagers in a Lagos secondary school, Ifemelu and Obinze fall in love. Their Nigeria is under military dictatorship, and people are leaving the country if they can. Ifemelu — beautiful, self-assured — departs for America to study. She suffers defeats and triumphs, finds and loses relationships and friendships, all the while feeling the weight of something she never thought of back home: race. Obinze — the quiet, thoughtful son of a professor — had hoped to join her, but post-9/11 America will not let him in, and he plunges into a dangerous, undocumented life in London.

Years later, Obinze is a wealthy man in a newly democratic Nigeria, while Ifemelu has achieved success as a writer of an eye-opening blog about race in America. But when Ifemelu returns to Nigeria, and she and Obinze reignite their shared passion—for their homeland and for each other—they will face the toughest decisions of their lives.
Fearless, gripping, at once darkly funny and tender, spanning three continents and numerous lives, Americanah is a richly told story set in today’s globalized world: Chimamanda Ngozi Adichie’s most powerful and astonishing novel yet.

[ Americanah is available from the libraries in a wide variety of formats. ]

An audacious, darkly glittering novel set in the eerie days of civilization’s collapse, Station Eleven tells the spellbinding story of a Hollywood star, his would-be savior, and a nomadic group of actors roaming the scattered outposts of the Great Lakes region, risking everything for art and humanity.

One snowy night Arthur Leander, a famous actor, has a heart attack onstage during a production of King Lear. Jeevan Chaudhary, a paparazzo-turned-EMT, is in the audience and leaps to his aid. A child actress named Kirsten Raymonde watches in horror as Jeevan performs CPR, pumping Arthur’s chest as the curtain drops, but Arthur is dead. That same night, as Jeevan walks home from the theater, a terrible flu begins to spread. Hospitals are flooded and Jeevan and his brother barricade themselves inside an apartment, watching out the window as cars clog the highways, gunshots ring out, and life disintegrates around them.

Fifteen years later, Kirsten is an actress with the Traveling Symphony. Together, this small troupe moves between the settlements of an altered world, performing Shakespeare and music for scattered communities of survivors. Written on their caravan, and tattooed on Kirsten’s arm is a line from Star Trek: “Because survival is insufficient.” But when they arrive in St. Deborah by the Water, they encounter a violent prophet who digs graves for anyone who dares to leave.

Spanning decades, moving back and forth in time, and vividly depicting life before and after the pandemic, this suspenseful, elegiac novel is rife with beauty. As Arthur falls in and out of love, as Jeevan watches the newscasters say their final good-byes, and as Kirsten finds herself caught in the crosshairs of the prophet, we see the strange twists of fate that connect them all. A novel of art, memory, and ambition, Station Eleven tells a story about the relationships that sustain us, the ephemeral nature of fame, and the beauty of the world as we know it.

[ Station 11 is available from the libraries in a wide variety of formats.. ]

Just Mercy: A Story of Justice and Redemption
by Bryan Stevenson [Biography Stevenson]

Bryan Stevenson was a young lawyer when he founded the Equal Justice Initiative, a legal practice dedicated to defending those most desperate and in need: the poor, the wrongly condemned, and women and children trapped in the farthest reaches of our criminal justice system. One of his first cases was that of Walter McMillian, a young man who was sentenced to die for a notorious murder he insisted he didn’t commit. The case drew Bryan into a tangle of conspiracy, political machination, and legal brinksmanship—and transformed his understanding of mercy and justice forever.

Just Mercy is at once an unforgettable account of an idealistic, gifted young lawyer’s coming of age, a moving window into the lives of those he has defended, and an inspiring argument for compassion in the pursuit of true justice.

A powerful true story about the potential for mercy to redeem us, and a clarion call to fix our broken system of justice—from one of the most brilliant and influential lawyers of our time.

[ Just Mercy is available from the libraries in a wide variety of formats. ]

The remaining titles on 2015’s “short list” of eleven were:

All the Light We Cannot See

The Girl on the Train

The Book of Unknown Americans

The Art of Hearing Heartbeats

Discussions of this year’s title will be held at various Lincoln locations during June, July or August, featuring members of the One Book – One Lincoln Selection Committee. Committee members and a Lincoln City Libraries staff member will be on hand to talk about their experience serving on the committee, about the winner, and about the three finalists. Dates and locations are listed below:

The One Book – One Lincoln finalists will be discussed by library staff on the following radio stations and dates:

[ radio listings will be posted when confirmed — please check back! ]

Library staff will also be at the market booths at the following outdoor Lincoln events, answering questions about One Book – One Lincoln, the Summer Reading Programs for Children, Teens and Adults, and other library topics:

Book Club in a Bag!

Book Clubs and organizations now have the ability to check out several popular titles, including two sets of each of the three 2015 One Book – One Lincoln finalists above, in a book club format. For each title, the Book Club in a Bag will contain 10 copies of that book as well as some starter discussion questions. Book Club in a Bag selections will be able to be checked out for 8 weeks but with no renewals. You can find out what additional titles are available in the Book Club in a Bag program by searching in the library catalog under Subject: Book Club in a Bag. 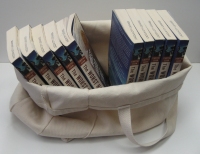 If your answer to either of those two questions is “yes,” then please visit our sign-up form, and check off the appropriate boxes. Or, you may call the Lincoln City Libraries’ One Book – One Lincoln staff contact at 441-8503.

Interested in past years’ One Book – One Lincoln selections?

Visit our main One Book – One Lincoln archive site [data from past years is still being converted for archiving on our new web site!]

Master list of all One Book — One Lincoln finalists and selected titles [2002-2015] in PDF format.

A list of what other communities are reading for similar programs can be found on the One Book Reading Promotion Projects page on the Library of Congress Center for the Book Web site.