One Book – One Lincoln – 2018
Here are this year’s three finalists!

This year’s winning title will be announced online on the morning of Labor Day, September 3rd, 2018!

We accepted your nominations for our seventeenth annual One Book – One Lincoln title, online via the libraries’ online nomination form on our web site throughout all of 2017 and January 2018, and via drop boxes at all the libraries in January 2018. All of your suggestions were forwarded to the One Book – One Lincoln selection committee, comprised of representatives throughout the community, which evaluated the 150+ nominated titles to choose the group of three finalists below — two fiction titles and one non-fiction. This group of finalists was announced at a live event, sponsored by The Foundation for Lincoln City Libraries, at The Mill in the Haymarket on May 28th, as well as on the libraries’ web site and social media platforms.

During June and July, the public was encouraged to vote on which of these three finalists you wanted to see as the 2018 One Book winner. The winning title will be announced in September.

A series of discussions of each of the three One Book – One Lincoln finalists was held this summer, however there still may be some pucoming public discussion opportunities — check that page. We encourage you to read any or all of these titles and watch the libraries’ website, Facebook feed, and the Lincoln Journal Star for further developments on One Book – One Lincoln – 2018.

And the three finalists for 2018 are… 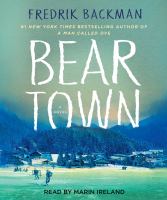 The #1 New York Times bestselling author of A Man Called Ove returns with a dazzling, profound novel about a small town with a big dream—and the price required to make it come true.

People say Beartown is finished. A tiny community nestled deep in the forest, it is slowly losing ground to the ever encroaching trees. But down by the lake stands an old ice rink, built generations ago by the working men who founded this town. And in that ice rink is the reason people in Beartown believe tomorrow will be better than today. Their junior ice hockey team is about to compete in the national semi-finals, and they actually have a shot at winning. All the hopes and dreams of this place now rest on the shoulders of a handful of teenage boys.

Being responsible for the hopes of an entire town is a heavy burden, and the semi-final match is the catalyst for a violent act that will leave a young girl traumatized and a town in turmoil. Accusations are made and, like ripples on a pond, they travel through all of Beartown, leaving no resident unaffected.

Beartown explores the hopes that bring a small community together, the secrets that tear it apart, and the courage it takes for an individual to go against the grain. In this story of a small forest town, Fredrik Backman has found the entire world.

>— Publisher’s official website for the book Beartown and Fredrick Backman —<

[ Beartown is available from the libraries in a wide variety of formats. ]

Killers of the Flower Moon: The Osage Murders and the Birth of the FBI
By David Grann [976.6 Gra]

From New Yorker staff writer David Grann, #1 New York Times best-selling author of The Lost City of Z, a twisting, haunting true-life murder mystery about one of the most monstrous crimes in American history.

In the 1920s, the richest people per capita in the world were members of the Osage Indian nation in Oklahoma. After oil was discovered beneath their land, they rode in chauffeured automobiles, built mansions, and sent their children to study in Europe.

Then, one by one, the Osage began to be killed off. The family of an Osage woman, Mollie Burkhart, became a prime target. Her relatives were shot and poisoned. And it was just the beginning, as more and more members of the tribe began to die under mysterious circumstances.

In this last remnant of the Wild West—where oilmen like J. P. Getty made their fortunes and where desperadoes like Al Spencer, the “Phantom Terror,” roamed — many of those who dared to investigate the killings were themselves murdered. As the death toll climbed to more than twenty-four, the FBI took up the case. It was one of the organization’s first major homicide investigations and the bureau badly bungled the case. In desperation, the young director, J. Edgar Hoover, turned to a former Texas Ranger named Tom White to unravel the mystery. White put together an undercover team, including one of the only American Indian agents in the bureau. The agents infiltrated the region, struggling to adopt the latest techniques of detection. Together with the Osage they began to expose one of the most chilling conspiracies in American history.

In Killers of the Flower Moon, David Grann revisits a shocking series of crimes in which dozens of people were murdered in cold blood. Based on years of research and startling new evidence, the book is a masterpiece of narrative nonfiction, as each step in the investigation reveals a series of sinister secrets and reversals. But more than that, it is a searing indictment of the callousness and prejudice toward American Indians that allowed the murderers to operate with impunity for so long. Killers of the Flower Moon is utterly compelling, but also emotionally devastating.

[ Killers of the Flower Moon is available from the libraries in a wide variety of formats. ] 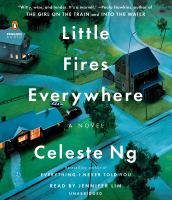 From the bestselling author of Everything I Never Told You, a riveting novel that traces the intertwined fates of the picture-perfect Richardson family and the enigmatic mother and daughter who upend their lives.

In Shaker Heights, a placid, progressive suburb of Cleveland, everything is planned – from the layout of the winding roads, to the colors of the houses, to the successful lives its residents will go on to lead. And no one embodies this spirit more than Elena Richardson, whose guiding principle is playing by the rules.

Enter Mia Warren – an enigmatic artist and single mother – who arrives in this idyllic bubble with her teenaged daughter Pearl, and rents a house from the Richardsons. Soon Mia and Pearl become more than tenants: all four Richardson children are drawn to the mother-daughter pair. But Mia carries with her a mysterious past and a disregard for the status quo that threatens to upend this carefully ordered community.

When old family friends of the Richardsons attempt to adopt a Chinese-American baby, a custody battle erupts that dramatically divides the town–and puts Mia and Elena on opposing sides. Suspicious of Mia and her motives, Elena is determined to uncover the secrets in Mia’s past. But her obsession will come at unexpected and devastating costs.

Little Fires Everywhere explores the weight of secrets, the nature of art and identity, and the ferocious pull of motherhood – and the danger of believing that following the rules can avert disaster.

[ Little Fires Everywhere is available from the libraries in a wide variety of formats. ]

The remaining titles on 2018’s “short list” of eleven were:

Click here to listen to an audio podcast recording of One Book coordinator Katie M., giving a Books Talk presentation on May 11th or May 14th 2018 about the 2018 Top Eleven Nominees.

The Book of Joy: Lasting Happiness in a Changing World
by ‘dzin-rgya-mtsho Bstan- (The Dalai Lama XIV) and Desmond Tutu [294.3 Ten]

Evicted: Poverty and Profit in the American City
by Matthew Desmond [339.46 Des]

Paris in the Present Tense
by Mark Helprin [Helprin]

The Nix
by Nathan Hill [Hill]

The Stranger in the Woods
by Christopher Knight [Biography Knight]

Lincoln in the Bardo
by George Saunders [Saunders]

If your answer to either of those two questions is “yes,” then please visit our sign-up form, and check off the appropriate boxes. Or, you may call the Lincoln City Libraries’ One Book – One Lincoln staff contact at 402-441-8592.