At the August 2020 Just Desserts meeting that took place online using Zoom meeting software, 14 members participated in a discussion of “Culinary Crime” mysteries, in which attendees were encouraged to read ANY entry in a food/drink-themed mystery novel, and share their thoughts in a “round-robin” format. Here’s a list of the novels/series that were mentioned by group members. We asked all attendees to also give a “Thumbs Up” or “Thumbs Down” for whatever series they sampled – the majority of participants had a lukewarm attitude towards Culinary Crime mysteries, ranging from not enjoying them, to finding them a fun escape between more serious novels. 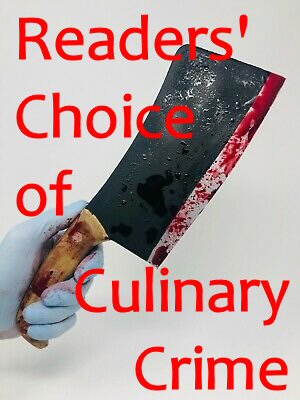 The Goldy Schulz series by Diane Mott Davidson (three group members reading in this series, all selecting either the first volume Catering to Nobody, or the second, Dying for Chocolate)

The Country Cooking School Mystery series by Paige Shelton; she read volume 3, If Bread Could Rise to the Occasion

The Nero Wolfe mystery series by Rex Stout, specifically volume 5, Too Many Cooks

The Sloan Krause brewery series by Ellie Alexander, starting with Death on Tap

The Alaskan Diner Mystery series by Elizabeth Logan, starting with Mousse and Murder

The Noodle Shop Mystery series by Vivien Chien, starting with Death by Dumpling

Following the “Series Share” portion of the meeting, we held our monthly round robin in which all 14 attendees were able to share recommendations of what other books they’ve been reading recently.

Here’s the list of mystery, thriller and suspense books recommended by Just Desserts members in August 2020:

And here were some non-mystery titles some group members also recommended in August 2020: