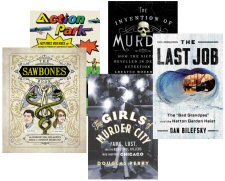 A booklist based on this talk is also available.

Lisa presents some of the books she’s recently read.


A booklist based on this talk is also available.

The National Book Award finalists provide excellent reading suggestions, which is how I came across “Hitler’s Furies: German Women in the Nazi Killing Fields” by Wendy Lower.

I’d just recently finished the novel, “HHhH” by Laurent Binet, also set in the Eastern European areas taken over by the Nazi government. With that still in mind, I learned a good deal from “Hitler’s Furies” and found it readable despite its serous subject matter.

Wendy Lower is a professor of history at Claremont McKenna College, and a consultant for the U.S. Holocaust Memorial Museum. Here she digs more deeply into the general understanding the the Final Solution depended on the participation or cooperation of the general German population. Half of that population was female, and yet the role of women has been seldom explored.

In “Hitler’s Furies” she tells the stories of particular women who fall into the categories of witnesses, accomplices, or perpetrators. Typically, these women were teachers, nurses, camp guards or wives of German officials. Many of them had moved to the countries to the east, where Germany was clearing space for the German people to live.

Lower begins with a chapter called “The Lost Generation of German Women” to set the context for the behavior she describes. This was key–looking back on this time we wonder how it ever could have happened. Lower tries to put the reader in the period before the Nazis rose to power, before Germany was defeated, when the Nazis seemed to offer the redemption of the country.

The narrative is steeped in the ongoing role of anti-Semitism. Lower describes how the existing prejudice was drilled and shaped into a pattern of brutal behavior. Also not be to ignored is the contrasting societal expectation that all women should be natural nurturers who would unite in their opposition to this behavior. Lower probes the intersection of these forces.

Lower writes as an academic. She’s careful to use reliable sources, and careful as well to draw limited conclusions. While she sometimes describes unbelievably violent behavior, she does so in exploration of understanding, not for sensation.

I’ll recommend this to readers interested in this era, or in the role of women, or those seeking a sense for how a country can create such an effective and horrific organization of death.

“Devil in the Grove” by Gilbert King

Over the weekend I finished “Devil in the Grove: Thurgood Marshall, the Groveland Boys, and the Dawn of a New America” by Gilbert King. I came across this title in the list of Pultizer Prize nominees–a goldmine of reading ideas.

Before he became a Supreme Court justice, and before he brought the landmark Brown vs. Board of Education case to the Supreme Court, Thurgood Marshall’s work at the NAACP took him all over the southern United States where race was a factor in court cases. A general pattern in his work was that the goal was to set up a successful appeal of a conviction. An acquittal was an impossible dream in nearly all of his cases.

Such was his strategy in the case of the Groveland Boys–four black men accused of raping a young white woman near Groveland, Florida, in 1949. King introduces a host of characters in setting the stage for this story–from the remarkable Sheriff Willis McCall to a woman reporter for a local newspaper to the four accused black men to the governors of Florida to members of the Ku Klux Klan to members of the local NAACP. King works hard to place the actions in the context of the time, where one foot is squarely in a system that as a matter of course denies justice to black people, and the other is stepping toward landmark decisions such as Brown vs. Board of Education.

He traces a chronology of beatings, shootings, and palpable danger for the men in custody, and  for the outsider attorneys who arrive in Florida in their defense. In the end, what justice looks like seems pretty unimpressive. What does impress is King’s ability to maintain the connection to context, and to weave a good deal of background information without losing the sense of story.

King’s focus on Thurgood Marshall further highlights context, knowing what we do of his later Supreme Court career. In terms of how the story works, the immense scope of his personality and impact balance the intensity of what happened at Groveland. From my vantage point in 2013, continual questions arose regarding how things have changed–or not–since 1949.

I’m a nonfiction fan generally, and especially seek well-told stories of American History. I’ve been recommending this to others who seek such a book, and especially to people with an interest in justice. I think this could be an excellent nonfiction choice for book groups who typically choose fiction. There is much to learn, and to discuss, in “Devil in the Grove.”