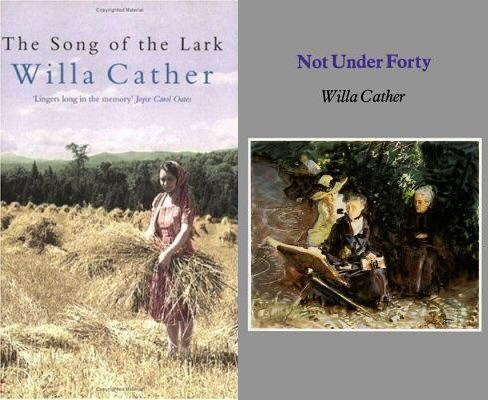 Erin, from the Heritage Room of Nebraska Authors, discusses The Song of the Lark and Not Under Forty by Willa Cather, and the eBook companion to the NET production, Yours, Willa Cather.

During our February 2010 meeting, we discussed Nebraska author Sean Doolittle’s 2006 Omaha-set mystery/thriller The Cleanup; a stand-alone novel, featuring down-on-his-luck Omaha cop Matthew Worth, sentenced to providing security at a local grocery store. When Matt steps up to be the knight in shining armor to a young sales clerk who’s been badly beaten by her boyfriend, he doesn’t realize what a mess he’s gotten himself into. Combine the Polish mafia, corrupt cops, a dead money runner and one of the worst snowstorms to hit the Omaha area in years, and you’ve got a contemporary noirish/hard-boiled thriller.

This book was discussed at the Just Desserts meeting on February 25, 2010. Whether or not you attended the actual meeting, you are welcome to share your own thoughts and opinions about this book in a reply comment to this blog post, below.

Join us next on March 25th at South Branch Library (6:45 p.m.), as we discuss Jacqueline Winspear’s, Maisie Dobbs. Additional titles for upcoming months’ discussions can be found on the Just Desserts section of the Book Groups page of BookGuide.

To finish off the 2007 season, we read a classic mystery by Nebraska’s own Mignon Eberhart — often called America’s Agatha Christie. The title we’ve selected is The Mystery of Hunting’s End, a traditional “locked room mystery.”

The Sand Hills of Nebraska, where Mignon G. Eberhart lived as a newlywed, inspired the setting of this 1930 chiller. Smack in the middle of the rolling desolation is Hunting’s End, a weekend lodge owned by the rich Kingery family. To that place socialite Matil Kingery invites a strange collection of guests — the same people who were at the lodge when her father died of “heart failure” exactly five years ago. She intends to find out which one of them murdered him. Posing as another guest is the dapper young detective, Lance O’Leary. At his recommendation, Matil has engaged Nurse Sarah Keate to care for Aunt Lucy Kingery at Hunting’s End — not a pleasant assignment as it turns out. Gathered at the lodge, Matil’s guests are shut off from the outside by a November snowstorm. Nurse Keate is the same sharp-eyed, stiletto-tongued, strong-stomached Nightingale and sleuth who established Mignon Eberhart as a mainstay of the golden age of detective fiction.

This title was discussed at the Just Desserts meeting on October 25, 2007. We encourage you to share your own thoughts and opinions about this book in a reply comment to this blog post, below!

For February 2007, we returned stateside, with a murder mystery set right here at home!

Nebraska author David Wiltse’s mystery, Heartland, is set in Falls City, NE. Here’s the book blurb: Falls City, Nebraska. Just a scratch on the Great Plains. To Billy Tree, it’s home-the last refuge for the ex-Secret Service agent scarred in body and soul by an unforgettable tragedy. But he’s trading one for another. For the quiet burg of his youth has changed over the years. Darkness has taken hold. And now, the killing secrets and terrible lies buried beneath the tranquil surface of Falls City are ready to erupt…. Where it begins is with a shocking sniper attack at the local high school. No motive. No clues. Just two innocent teachers left dead, and a third injured. A woman with secrets of her own, she shares a place in Billy’s heart, his past, and his fears, when a second murder paralyzes the town. Urged by the sheriff to help in the investigation, Billy can’t refuse. Even if it means seeing old friends in a terrifying new light, and exposing himself to the insidious rage of a mysterious killer…. It all ends in the shattering silence of an isolated silo. Here blood will tell. The secrets of Falls City will unfold. And the truth could cost Billy more than he’d ever imagined….

This title was discussed at the Just Desserts meeting on February 22, 2007. We encourage you to share your own thoughts and opinions about this book in a reply comment to this blog post, below!

The June 2006 meeting of the Just Desserts discussion group focused on a pair of mysteries by former Lincolnite Harley Jane Kozak.

Kozak, a film, tv and stage actress who grew up in Lincoln but now lives in California, burst onto the mystery scene with her premiere novel, Dating Dead Men in 2004, and followed up with a very successful sequel Dating is Murder in 2005. The first book won the Nebraska Book Award for Best Fiction, and also won a triumvirate of the national mystery awards: The Agatha Award, the Anthony Award and the Macavity Award (all for best first mystery novel).

You can see a profile of Kozak here on the BookGuide Web site: Nebraska Author Harley Jane Kozak. There’s also a short interview with Kozak here as well.

This title was discussed at the Just Desserts meeting on June 29, 2006. We encourage you to share your own thoughts and opinions about this book in a reply comment to this blog post, below!