Join the discussion of the Billy Boyle series by James R. Benn 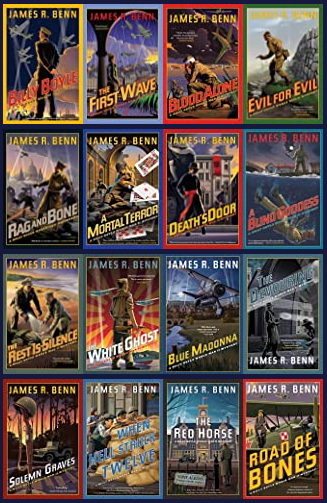 The Just Desserts mystery fiction discussion group held its first meeting of 2022 on Zoom, on January 27th, 2022. Thirteen virtual attendees discussed the “Billy Boyle” mystery series, set during World War II, by James R. Benn. If you’ve read any of the 16 volumes (so far) in the Billy Boyle series, and would like to contribute your comments about it, please do so as a reply comment to this blog post, below. Group members were encourage to read any one or more volume in this 16-volume series — amongst the 13 participants, eight different books were selected!

For reminders about upcoming Just Desserts meetings (once they resume) and/or other announcements of interest to mystery fans, don’t forget to sign up for the Just Desserts e-mail list. Or, now that in-person meetings are possible again, if you’re logged into your account on Facebook, you can visit the Events page for the Lincoln City Libraries, and mark whether or not you plan to attend upcoming sessions of Just Desserts – this is a great way for you to help us promote this engaging discussion group!

So…What did you think of the “Billy Boyle” series? Have you read any of these, or others, by James R. Benn?

The following handout was prepared for the members of Just Desserts: The Billy Boyle series by James R. Benn.

We hope to see you at future gatherings of the Just Desserts group, whether in-person or on Zoom. Watch the libraries’ website and social media accounts (Facebook, Twitter, Instagram) for the latest updates! In the meantime, we hope Just Desserters will join us on February 24th, 2022, for a discussion of Alex Michaelides’ stand-alone thriller The Silent Patient.

“All the Light We Cannot See” by Anthony Doerr

My posting of books I’ve read from the American Library Association Notable Books list has backed up a little. I finished “All the Light We Cannot See” by Anthony Doerr earlier this spring, and yet it has stuck with me.

The winner of the 2015 Pulitzer Price for fiction, it follows two young people through World War II. Doerr tells the stories of a blind French girl named Marie Laure, and a brilliant young German solider, Werner Pfennig, at first separately, but then draws them close together in an artillery-racked city. Neither child has an easy life. Maure Laure, whose mother is dead, loses her sight when she is six. Werner, growing up in a German orphanage, seems destined for the life of a miner.

And yet, each is gifted. Maurie Laure’s loving father teachers her to become independent and walk around Paris on her own; his job as locksmith at the Museum of Natural History provides the perfect home for her remarkable intellectual curiosity.

Werner figures out how to repair and build radios. His homemade radio allows him and his sister to listen in on fascinating science-related transmissions from France. His natural math skills bring him to the attention of the German war machine. He works on a critical device that reveals the source of radio transmissions.

Radios play a key role in the story–in talking about this book, Doerr described how he was inspired by the wonder of cell phones, which we now take for granted, the wonder of communication virtually through the air. He weaves this into both characters, with Marie Laure and her great-uncle transmitting information to the resistance via radio, and Werner using radio technology to home in on their location to shut them down, or worse.

Anthony Doerr creates these two remarkable characters, both missing so much, and yet who have so much. The war takes one thing after another from them, until they encounter each other just once, in the heavily bombed French coastal town of St. Malo. Doerr draws a compelling background of Europe in the midst of World War II, but the novel really shines in the characters he creates.

A Library Journal reviewer said, “The novel presents two characters so interesting and sympathetic that readers will keep turning the pages hoping for an impossibly happy ending.” What I found frustrating, but entirely reasonable, are the loose ends Doerr leaves. The nature of war is that some people’s fates will never be known. The novel ends in our own time with the people who remain, carrying on even with those holes in their hearts.

I usually reflect on whether each title on the Notable Books List deserves to be called “notable.” This book more than earns the label, beginning with many fascinating parts, and shaping them into something both heartbreaking and beautiful, and whole.

I’m just now getting caught up on reviewing several books I recently finished. I had taken plenty of time reading “Year Zero: A History of 1945” by Ian Buruma, from the nonfiction part of the Notable Books list. I began it in May or so, read about three quarters of it, and set it aside until a few weekends ago, when I determined to finish it.

It’s a sweeping look at the year after the end of World War II, a time when people began making organization out of the chaos of the war. Buruma addresses various topics in three general sections, describing the situation in Europe, in Asia, and in other parts of the world impacted by the war. Some chapters are primarily how individuals adjusted–how hunger, exultation, and revenge played out. Later chapters address institutions and cultures, such as how the allied countries went about re-educating the German and Japanese people. A theme that recurs is the complexity of relationships–few people, groups, or countries were entirely “clean” in motive and behavior. This is what will stick with me from “Year Zero.”

Buruma introduces the book with the story of his Dutch father, who was kidnapped as a college student to work in a factory in Berlin. When the war ended, he nearly died of starvation, but eventually made it home. His story led Buruma to ponder all of the stories, all of the adjustments, all of the things that had to be set right.

As a reader, I found this information, and Buruma’s approach, interesting. Its drawback is that his basic idea, to explore this chaotic time in regard to several aspects, and spanning continents, keeps him from developing a strong narrative thread. The view is awfully wide, and not especially deep. Certainly he explores interesting themes, but without the strong storytelling structure that would create a more compelling book.

Even so “Year Zero” addresses an era of interest to many readers. I expect that for those who are quite familiar with the time period, Buruma’s rich information and perspective will add much to their own already-developed sense of the war’s story.

The National Book Award finalists provide excellent reading suggestions, which is how I came across “Hitler’s Furies: German Women in the Nazi Killing Fields” by Wendy Lower.

I’d just recently finished the novel, “HHhH” by Laurent Binet, also set in the Eastern European areas taken over by the Nazi government. With that still in mind, I learned a good deal from “Hitler’s Furies” and found it readable despite its serous subject matter.

Wendy Lower is a professor of history at Claremont McKenna College, and a consultant for the U.S. Holocaust Memorial Museum. Here she digs more deeply into the general understanding the the Final Solution depended on the participation or cooperation of the general German population. Half of that population was female, and yet the role of women has been seldom explored.

In “Hitler’s Furies” she tells the stories of particular women who fall into the categories of witnesses, accomplices, or perpetrators. Typically, these women were teachers, nurses, camp guards or wives of German officials. Many of them had moved to the countries to the east, where Germany was clearing space for the German people to live.

Lower begins with a chapter called “The Lost Generation of German Women” to set the context for the behavior she describes. This was key–looking back on this time we wonder how it ever could have happened. Lower tries to put the reader in the period before the Nazis rose to power, before Germany was defeated, when the Nazis seemed to offer the redemption of the country.

The narrative is steeped in the ongoing role of anti-Semitism. Lower describes how the existing prejudice was drilled and shaped into a pattern of brutal behavior. Also not be to ignored is the contrasting societal expectation that all women should be natural nurturers who would unite in their opposition to this behavior. Lower probes the intersection of these forces.

Lower writes as an academic. She’s careful to use reliable sources, and careful as well to draw limited conclusions. While she sometimes describes unbelievably violent behavior, she does so in exploration of understanding, not for sensation.

I’ll recommend this to readers interested in this era, or in the role of women, or those seeking a sense for how a country can create such an effective and horrific organization of death.

What a Notable–“Unbroken” by Laura Hillenbrand

Finally, I’ve read “Unbroken” by Laura Hillenbrand. I’ve heard so many people comment on this nonficiton story of Louis Zamperini, a runner on the US Olympic team who became a World War II hero by surviving for weeks on a life raft, and months in Japanese Prisoner of War camps.

And it was good, one of the titles on this year’s American Library Association Notable Books list.

Laura Hillenbrand (who has an interesting story of her own) follows up her stellar “Seabiscuit” with this compelling story. She tells it straightforwardly and chronologically. Hillenbrand has that gift for telling the story in a way that is clearly shaped and considered, for example, in how people are introduced and then brought back into the story, and yet her style gets out of the way of the story.

What I’ll remember from this book is both the evil behavior of many of the Japanese captors, and the survival of the prisoners. How DO people maintain their dignity and selfhood in the face of so many attempts to break them? In Zamperini’s case, he was made a target of beatings and cruelty because of his fame. Yet he survived. I knew that the sections set in the POW camps would be horrifying, but I found myself especially touched by Zamperini’s return to home. He was beloved, a hero, and yet he was falling apart, drinking himself nearly to death, before he turned himself around at a Billy Graham event.

I noticed how Hillenbrand goes out of her way not to judge the behavior the men who were stranded, or were prisoners. She works hard to set a context where every rule and every expectation are turned upside down, where people survive by doing things they never thought they could do. She also makes a point of developing characters, not allowing all Japanese or all American people to be presented a certain way.

I finished this book on Independence Day. It seemed an especially fitting day to reflect on the people who have been called the “greatest generation.” I’ll recommend this to a lot of people–fiction readers will appreciate the strong story, history fans will find sound information, and people who enjoy “extreme” stories of survival certainly will find much to value. I think that many people have avoided reading this because they shy away from the depictions of the camps, and I understand that. And yet I’d still encourage people to read this with open eyes and mind. The book’s subtitle, “A World War II Story of Survival, Resilience, and Redemption” reflects Hillenbrand’s success in showing that even out of this horror, goodness survived.